Rod Loyola, President of the Non-Academic Staff Association (NASA) at the University of Alberta and community organizer, will be running for the Alberta NDP in the electoral riding of Edmonton-Ellerslie in preparation for the next provincial election, a seat he previously ran for in the 2012 provincial election. He will receive the nomination as the NDP candidate by acclamation at the Edmonton-Ellerslie District Association meeting on June 18, 2014.

Loyola has been actively involved in many advocacy issues in recent years, from NASA’s campaign calling for the Progressive Conservative (PC) government to restore funding for post-secondary education in Alberta to the adamant calls for the PC government to abandon Bills 9 and 10, which affects the pension plans of public sector workers. Loyola plans to continue voicing Albertans’ concerns for a secure future, particularly for those most vulnerable. “Responsible management of the province’s resources is the key issue as we move forward into the next election. We need people of integrity to act on behalf of Albertans as we move forward towards a sustainable future for all,” says Loyola.

“Rod is an amazing advocate for his community and the people who live in it. He understands where we have come from and where we need to go. I’m confident that he will work hard and would be a strong representative for us all.” Sarah Hoffman, Edmonton Public School Board Trustee, Ward G

To Rod, people come first. A just economy is achievable. The resources of this province belong to us all. It’s time for all Albertans to take control.

Join the Alberta NDP Edmonton Ellerslie Electoral District Association for their June 18 nomination meeting. Alberta NDP Leader Brian Mason will be our Guest of Honour and Speaker, joined by Alberta NDP House Leader, Ms. Rachel Notley. Join in on the celebration as we continue to grow the Alberta NDP and prepare ourselves for the next provincial election.

As progressives we often speak of the status quo and we reflect on how difficult it is to change.  It certainly is a challenge but it is not impossible. Join the Alberta NDP Edmonton Strathcona Electoral District Association for an evening of lively discussion as together we explore the elements for creating cultural change that will continue to strengthen the achievements of the Alberta NDP as we move forward.

Rod will be sharing some of his spoken word pieces as they relate to progressive culture and education.

As some of you may know, at the last Alberta NDP Convention I was acclaimed as the Vice-President for the Edmonton Region along with Peggy Wright who was elected to represent Edmonton. I take this responsibility very seriously. It’s important to build the Alberta NDP as we prepare for the next Alberta General Election but more importantly for the many years to come if we hope to gain more New Democrat MLAs in the Legislature. For this reason I have decided not to seek the Federal NDP nomination as planned and to focus on building the Alberta NDP instead. It was a difficult decision to make. There are a number of federal issues that I have been actively involved in for many years; however, there are provincial issues that are just as important, healthcare and Education and the potential privatization of each by the PCs and Wildrose being just a couple that deserve our focus.

In my new role with the party I hope to work with many of you to build on achievements that have been established to date. There are a couple of initiatives we are recruiting volunteers for, the most immediate is to form a team to table at community and labour events in Edmonton. If you are interested in this volunteer opportunity please get in touch with me by emailing me at 1rodloyola@gmail.com

THE PRIVATIZATION OF ALBERTA’S PUBLIC SERVICES

Should the Invasion Continue?
*****

Are you familiar with the ongoing efforts of the Alberta Government to allow for-profit healthcare? The City of Edmonton’s plan to build a SE LRT with private companies? Nestles corporation’s influence on the University of Alberta? The Alberta Government’s efforts to muzzle our public service unions? The loss of public control of our senior’s care, childcare, social services, post-secondary education and other public services?

Please join The Council of Canadians Edmonton Chapter and others who care about keeping public services public, accountable and democratically run by citizens. Refreshments provided. 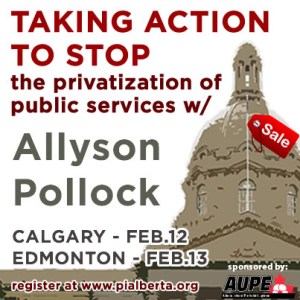 As chair of the Post-Secondary Education Task Force of Public Interest Alberta, I am happy to promote what will prove to be an amazing event. Please join me and so many others from the progressive community as we learn more about the processes used to privatize public services and what we as a community can do to take action against it.

Following the presentation, Q&A forums will provide an opportunity to share strategies on how to promote public solutions and engage citizens to take action on P3s.

Registration is $15 and $10 for low-income. Tickets will be available for pick up at the door. For more information and to register, please call 780-420-0471 or email office@pialberta.org

EDMONTON MILL WOODS FEDERAL NDP CONSTITUENCY ASSOCIATION
HOLIDAY SOCIAL
*****
Friday, December 13, 2013
7:00 PM
Koffee Cafe
6120 – 28 Avenue
Appetizers provided by Koffee Cafe
Please join us for an evening of friendship and solidarity as we set the foundation for the 2015 federal election. We call on all NDP sympathizers, supporters, and advocates. 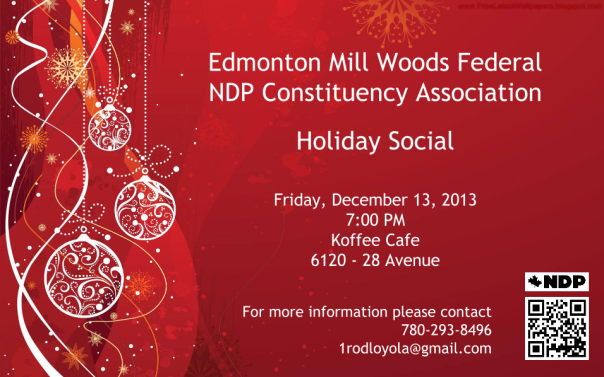 With omnibus Bill C-4 the conservatives are yet again pushing through policies having nothing to do with the budget.  Bill C-4 includes changes having to do with the Mackenzie Valley Gas Project, and Public Service Labour Relations to name a few. Similar to omnibus Bills C-38, C-45, and C-60, the Conservatives are changing the face of Canada and most importantly the values that we hold dear as Canadians.

If passed this potential piece of legislation could significantly weaken the ability of employees to refuse to work in dangerous conditions. It grants virtually all health and safety powers to the minister. This concentration of power in the hands of one minister is very dangerous.

When the Conservatives attack the Canada Labour Code, they are attacking what Canadians worked hard to build over the years, the struggle for healthier and safer work conditions. This is the opposite of progress. This is a step backwards and we as Canadians should be very concerned. Instead of protecting Canadians from having to work in situations that expose them to unacceptable risks, they are nullifying existing legislations that protect us.

This is yet another example of how Conservative policies affect your daily life.

Please contact your MP today and let them know that omnibus Bill C-4 is unacceptable.

Blogging thoughts in the Circle

An insider's view of Alberta politics

The latest news on WordPress.com and the WordPress community.